You travel at the heart of Europe, from the romantic Czech capital, by the edges of one of the most beautiful rivers of the continent. 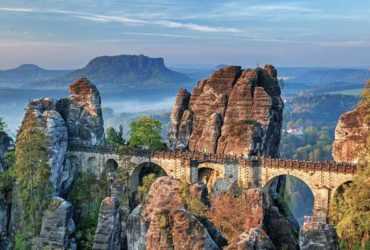 This journey at the heart of Europe suggests you a tour with signposted roads and[...]

Discover the Czech Republic by bike

The Czech Republic is a destination for cycling: an extensive network of small, uncrowded roads will lead you to discover its important cultural heritage, unspoilt natural areas and numerous historic sites. Stops full of romance await you around the corner of picturesque landscapes full of charm, far from mass tourism.

Many treasures await you during your bike stay, on the cycling path along the Elbe or through the vineyards.

The Czech Republic has existed as an independent state since 1993 but the territory it occupies is rich in historical events and influences that have forged it. Torn between the influences of Germany, Hungary, Austria, it became part of Czechoslovakia in 1918 after World War I and following the dismantling of the Austrian Empire.

The communist period will crystallize tensions between Czechs and Slovaks. In 1968, the Prague Spring announced the gradual disintegration of Czechoslovakia until the Velvet Revolution of 1989. This followed a transition that led to the creation of two independent states: Slovakia and the Czech Republic.

This tormented past did not erase traditions close to those of the German and Austrian neighbors, with sometimes some French influences. Here, art and knowledge are highly appreciated so that the cultural and artistic offers are numerous.

Czech cuisine is influenced by neighboring countries such as Germany, Austria, Hungary and Poland. Czechs enjoy grilled or roasted meat dishes, often served in sauce and served with rice, potatoes and knedliky, a type of dumpling. As for drinks, the Czechs are very proud of the “pivo”, the local beer, available in more than 300 varieties! This does not mean that you will not find wines worthy of interest …

Roads and bike lanes in the Czech Republic

The Czech Republic is a destination (still) little known for cycling tourism but its facilities allow cyclists to discover in good conditions all the riches of the country, through the variety of its landscapes.

The national network of marked cycle routes has a dozen major routes that allow you to discover the different regions of the country away from car traffic. You will enjoy more than 2000 km served by the 4 routes of EuroVelo that cross the country.

The weather in the Czech Republic

The climate of the Czech Republic is mostly very suitable for cycling holidays. Temperatures are never extreme. The winter is very cold and snowy but in the spring the temperatures become milder as well as in autumn, recommended seasons for you to cycle to discover the treasures of the Czech Republic. Summer is hotter but also rainier.

The 8 must-see sites in the Czech Republic

The Czech Republic is full of sites to visit. Here is a selection that will stir your curiosity: