Onto the path of freedom 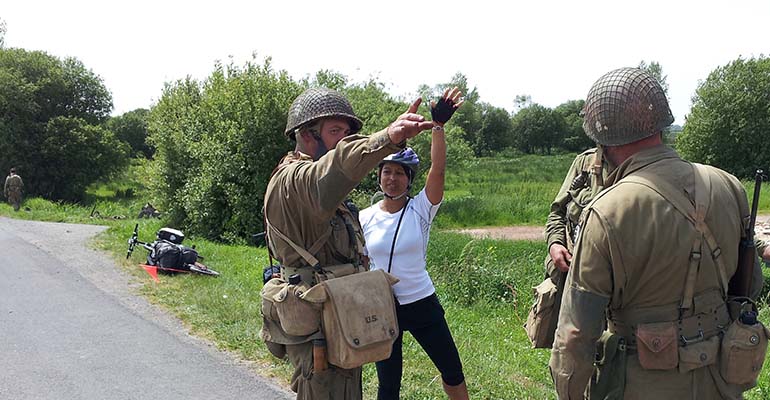 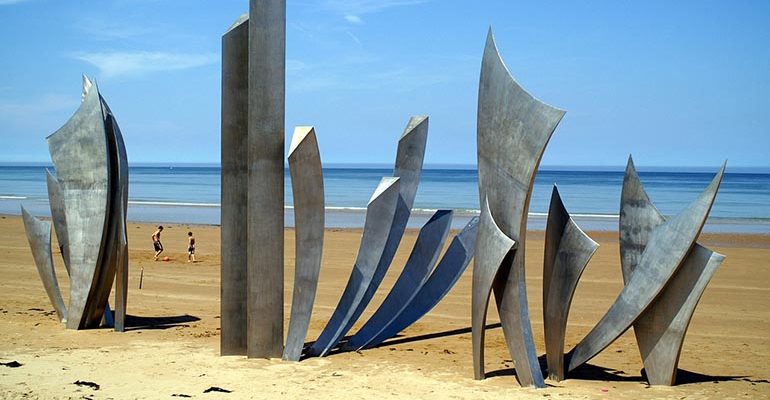 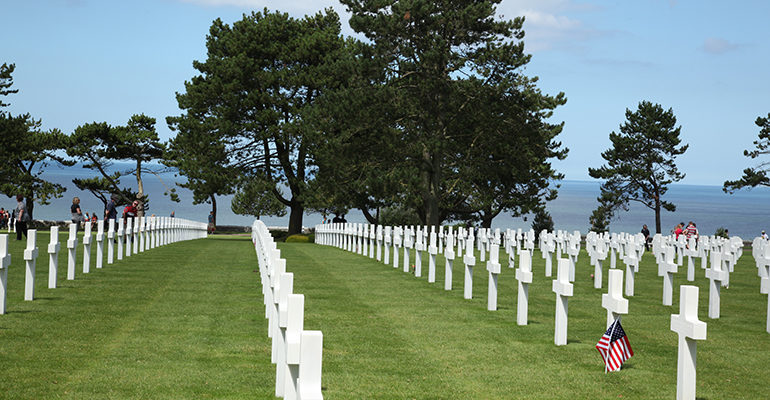 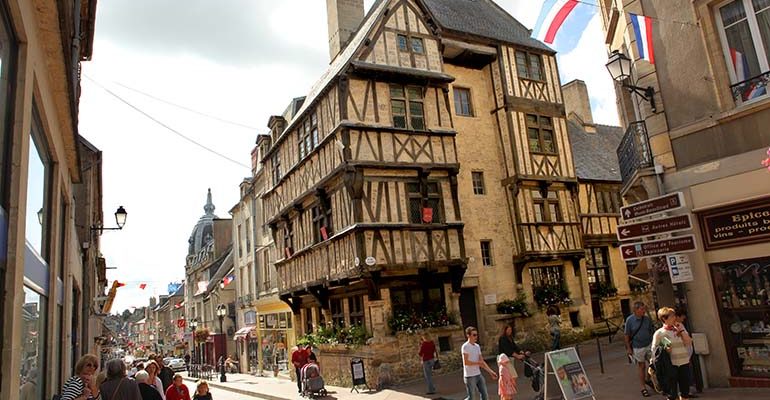 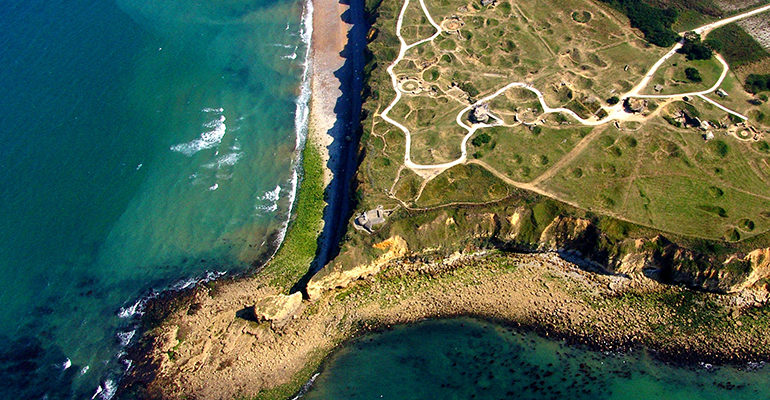 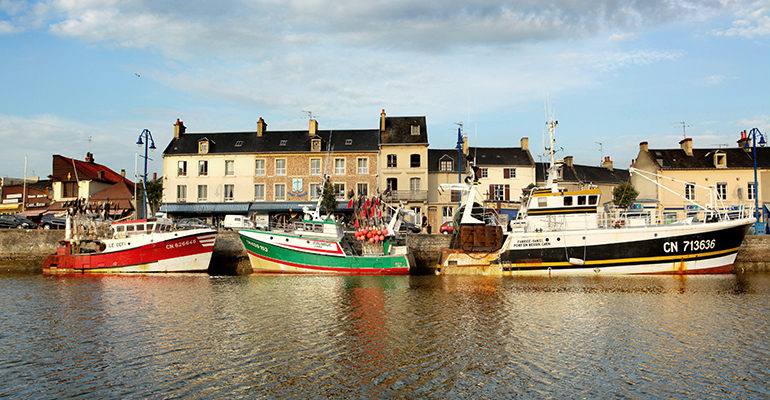 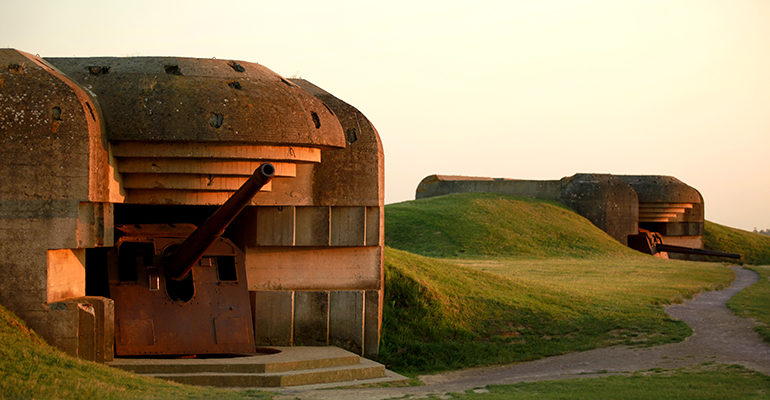 The Côte de Nacre
The D-Day landing beaches : Omaha, Juno, Gold, Utah
The pointe du Hoc and its memorial
The American cemetery in Colleville-sur-Mer
Bayeux and its typical houses

Along the Côte de Nacre and through the Cotentin marshland

From Bayeux you ride to the main D-Day landing beaches. Under the allies’ flags still floating everywhere, discover a region forever marked by the events of 6 june 1944.

– Omaha beach, Juno beach, Gold beach, Sword beach, Utah Beach. They witnessed the arrival of thousands of young soldiers from the American, English, French, Polish allied forces. They hold a piece of history and all have something to tell about that day.
– Stop in some of the museums you come accross on the itinerary. They will help you visualize the forces in place at the time, the equipment used and geographical surface covered on the D-Day landing.
– The American, Canadian and German military cemeteries all demonstrate the extent and violence of the attacks. Sites of great emotional power, they pay a tribute to those who enabled the return of freedom.
– Sainte-Mère l’Eglise and its clock tower, famous for a poor paratrooper who landed on it.

Between these sites you cycle through a bucolic norman wooded countryside. The small routes take you to many manors, castles and churches preserved or rebuilt after the war.

A journey between land and sea, from the English conquest in 1066 to the Liberation in 1945. 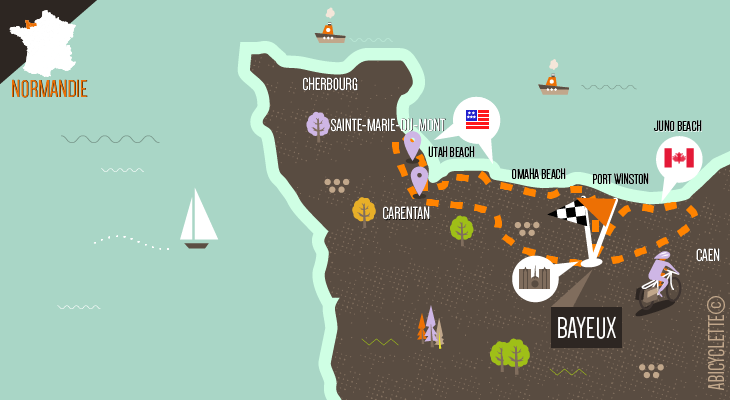 Arrive at your convenience during the day. Meet with our local guide in Bayeux who gives you your travel documents and gps. He can answer all your questions and reveal all the secrets of the region to you.

You cycle around Bayeux and to Arromanches, an artificial port of the second world war. The Arromanches 360 is a film shown on 9 screens in HD, discover exceptional archive footages collected from around the world that tell the whole story of the 100 days of the Battle of Normandy. Carry on to the other landing beaches of Gold beach and Juno beach.

You cycle to Port-en-Bessin and the ocean. From this charming little fishing port, you ride along the Côte de Nacre toward the American cemetery, Omaha Beach and the Pointe du Hoc. These three historical sites help you better understand the difficulty of the landing and the important human losses on D-DAY. You then enter a unique landscape, the Regional Natural Park of Cotentin. You spend the night in a charming hotel in the small town of Carentan, in the heart of the Regional Park. You arrive in Isigny-sur-Mer, known for its dairy transformation activity such as the famous “Caramel d’Isigny”, and its fishing acticity with its “caïeux”. Then ou cycle through the traditional wooded countryside. You finally arrive in Carentan where you spend the night.

From CARENTAN to SAINTE-MARIE-DU-MONT 52km 128m

The tour takes you to the small but famous village of Sainte-Mère-Eglise. Its clock tower holds a historical anecdote! You then cycle towards the sea to reach Utah beach and its beautiful white sand dune. A memorial shows its visitors images of the historical events which took place on the 6th of June 1944.

From SAINTE-MARIE-DU-MONT to BAYEUX 60km 341m

You leave the Cotentin peninsula passsing by the famous pont de la Barquette. Trough the Normandy countryside, the route reveals one of its marvels, its bucolic wooden countryside. Onto small roads, surrounded by tall hedges, embankments and where two vehicles can hardly drive past each other. You can see small villages with large stone houses and original churches. In Bayeux, one of the towns miraculously spared from the bombings, stroll through the streets and appreciate its typical houses.

End of stay after breakfast. Before you leave enjoy a visit to the Bayeux tapestry museum. It displays a major and amazingly preserved 11th century work of art, a 70 meters (230 feet) long tapestry relating the conquest of England by William the Conqueror! 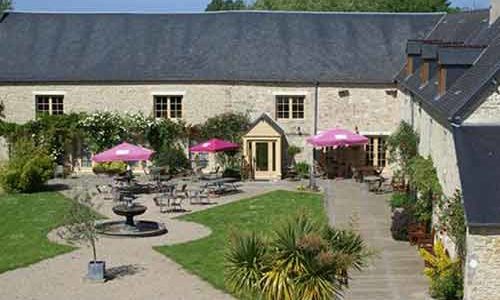 Starting from 865€/participant in Self Guided option | See detailed prices 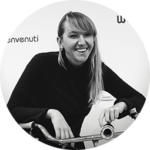 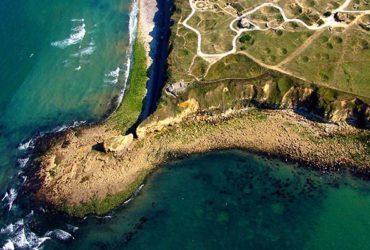 Bayeux and the Côte de Nacre

From Bayeux, miraculously spared from the massive bombings of World War II, you ride to[...] 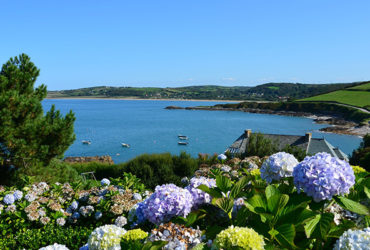 Cycling around the Cotentin peninsula

Discover the landscapes of the Normandy coast by bike and experience a cycling journey from Granville to the landing beaches, via Cherbourg ... 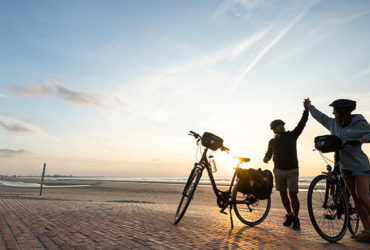 The Vélomaritime from Caen to Dunkerque

Ride on Vélomaritime, from Normand D-Day Beaches to Belgium border. 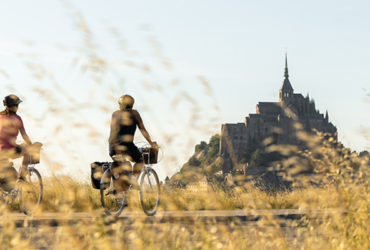