Are you looking for a natural space to get away from it all, to recharge your batteries, the Baie de Somme, classified as a Grand Site of France, offers beautiful cycling trips. The richness of the flora and fauna, the play of light to the rhythm of the tides, the varied landscapes guarantee surprises and moments of contemplation. 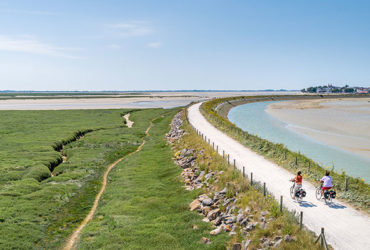 The Somme Bay by sustainable transport

By bike, foot or canoe in the heart of the Bay 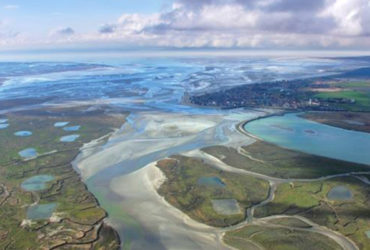 3 days by bike in the fresh sea air.

Due to the beauty of its landscapes and the richness of its fauna and flora, the Baie de Somme lends itself perfectly to bike rides. On your bicycle, you contemplate the seals and birds that inhabit here. Its unspoiled nature, its changing landscapes according to the tides, its flat relief and its dense network of cycle paths on sight is a delight for bicycle travelers of all levels.

The Baie de Somme is located in the northern part of France, in the old historic region of Picardy now included in the Hauts de France. This is the north of France. The architecture of the houses is felt as well as the accent of the inhabitants which recalls neighboring Belgium.
Renowned for their warmth, the Picards welcome you with open arms. They are pleased to help you discover the natural, historical and cultural riches of the Baie de Somme.

The Baie de Somme is a tasty gastronomy shared between the products of the land and the sea. The Picardy specialties are a clever combination of these two influences. Ficelle picarde (savory crêpe) and bisteu (potato casserole) are the most popular appetizers. Traditional dishes are divided between meat (rabbit with prunes) and fish (la caudière). Caught in the Baie de Somme, cockles and mussels as well as prawns are popular products with locals. Blackcurrant liqueur embellished with cider brandy, cassigoutte is the emblematic alcohol of the region.

Roads and cycle paths in the Baie de Somme

The Baie de Somme is crossed by the Vélomaritime which links Roscoff in Brittany to Bray Dunes at the gates of Belgium. Its 1,500 kilometer coastline runs along the coasts of the Channel and the North Sea. On a European scale, this route is part of EuroVelo 4 which then runs to Kiev in Ukraine. In the Baie de Somme sector, the Vélomaritime is mainly made up of specific site routes with gentle relief, which ensures safety and comfort for travelers.

On the banks of the Somme canal, a greenway links Saint-Valéry sur Somme to Amiens, the largest town in the Somme department. Dotted with castles and bathed in generous nature, the Somme cycle route is 160 kilometers long.

The weather in Baie de Somme

In the Baie de Somme, the climate is mild. The influence of the sea brings balminess. As in Brittany or Normandy, rain is not uncommon but the wind blowing from the sea quickly chases the precipitation away. From May, cycling through the Bay of Somme is pleasant with temperatures often close to 20°C. Summer is the perfect time. The sun is shining in the Picardy sky and temperatures fluctuate between 20 and 30°C. By bike, it is nice to travel in the Baie de Somme from May to September with the weather being most often mild during this period.

The 6 must-see experiences in the Baie de Somme

Nature and culture enthusiasts will be pleased during their stay in the Baie de Somme by bike thanks to these must-do experiences: