The Canal du Midi by bike

The Canal du Midi is the most famous of the French canals. Getaway by bike on its towpath and enjoy the sun of south-west France and its gourmet gastronomy! 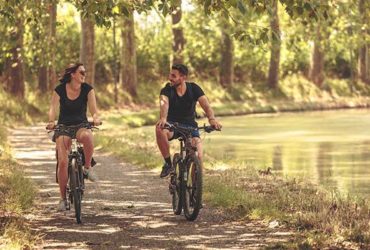 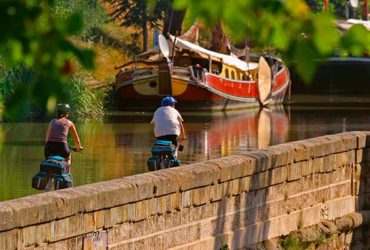 From Toulouse, the pink city, to the beaches of the Mediterranean Sea, the Canal du Midi cuts through the Occitanie region from west to east. With a length of 241 km, this ribbon of water is dotted with numerous structures (locks, canal bridges, aqueducts, bridges, dams, outfall, tunnel). This summit-level canal was built in the 17th century under the direction of Jean-Paul Riquet, its designer. A major revolution for river transport at the time. Since the 19th century, the Canal Latéral à la Garonne has extended the waterway of the Canal du Midi and has made it possible to unite the Atlantic Ocean and the Mediterranean Sea. Listed as a UNESCO World Heritage Site, the Canal du Midi immerses bike travelers on a discovery of an exceptional region bathed by the sun, rich in historical interests and with a generous gastronomy.

The bike paths of the Canal du Midi

Punctuated by flowery locks, rows of plane trees with tufted crowns and barges and boats that sail on its river bed, cycling the Canal du Midi is a relaxing ride. On the greenway that winds along the Toulouse Canal to the Mediterranean Sea, you pedal safely away from car traffic and away from the hustle and bustle of the cities. Tranquility, relaxation and pleasure are the key words of this itinerary along the water.

Flat and safe, the route is suitable for a large audience. Novices or enthusiasts can treat themselves to a cycling holiday on the banks of the Canal du Midi. Nevertheless, it is advisable to stay vigilant because, strewn with roots or stones, the towpath is dented on certain portions. Sturdy bikes are recommended.

Due to its varied route, the Canal du Midi appeals to lovers of Nature and History. The latter crosses bucolic, wine-growing and even coastal landscapes at the end of the route. Although the route is in the wilderness, crossing picturesque towns and villages livens up the Canal du Midi. Along the way, you cross the unmissable medieval citadel of Carcassonne flanked by massive ramparts. Castelnaudary, Le Sommail, Béziers or Agde are all interesting stops to discover along the way. On the Canal du Midi, there is no shortage of works of art. Locks, aqueducts, canal bridges, bridges… there are 328 of them on the route. Something to delight history and architecture buffs. In the evening, make way for the pleasures of good food. Occitanie is a region with hearty and tasty gastronomy where you eat well. At each stage, cassoulet from Castelnaudary, fish soup à la Sétoise, fougasse bread with cracklings, all accompanied by local wines are the reward for your effort.

Depending on your expectations and desires, we offer several bicycle travel packages on the Canal du Midi. From a simple weekend between Toulouse and Carcassonne and a whole touring week. Do not hesitate to contact us, we will be happy to assist you in the organization of your cycling trip to discover Occitanie and the Canal du Midi.

To take full advantage of its green landscapes and mild temperatures, the best season to cycle the Canal du Midi is probably spring. Summer is however worth considering because the towpaths are naturally protected from too much exposure to the sun thanks to the trees which encircle the route and offer welcome shade to the cyclist. Autumn is also a magical and ideal season to get started with its soft orange color.

The 6 must-see sites of the Canal du Midi:

From Toulouse to Sète, the Canal du Midi flows with rich natural heritage and a flood of historical and cultural curiosities. Along the way, you succumb to the rich Occitan gastronomy and fall under the spell of small towns full of character.