Our self guided tours on La Vélodyssée – eurovelo 1, the Atlantic cycling route 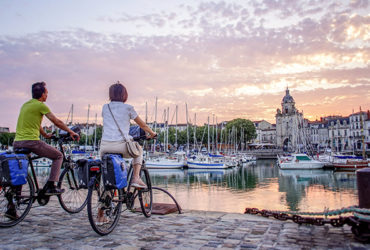 Travelling across Brittany and along the Atlantic to the Basque Coast, La Vélodyssée is an invigorating cycling journey through landscapes of unspoilt beauty. Get on your bike and explore this cycle tour of over 1200 km with its beautiful ocean backdrop! Between Roscoff and Hendaye, 70% of the route is on traffic-free paths. Discover our regional treasures as you follow the longest, fully-signposted cycle route in France.

So whether as a family, a couple, or for a bit of sporting challenge, come and discover the Atlantic coast and all the treasures to be explored along this fully secure and waymarked route from north to south and from south to north. Every turn brings new surprises as seen from a bike, that powerful symbol of personal freedom.

From Brittany, land of legends, along the Loire Estuary, through the marshes in the Vendée, and then down through maritime Aquitaine, the route traverses magical, ever-changing natural landscapes, taking in canals, heaths, marshes, dunes, beaches, pine forests, wooded farmland, lakes, and more.

The itinerary in brief

The 1200 km of the Vélodyssée can be done in a month or less. The route, easily accessible, can be followed in sections from Roscoff, Nantes or Bordeaux.
The route leaves the Brittany coast at Roscoff to take the towpaths of the Nantes-Brest canal to the city of Nantes. It then joins the Atlantic coast by a few shared routes with moderate traffic before crisscrossing the coast through the seaside resorts on protected cycle paths.
To the south of the Gironde estuary, you enter the magnificent Landes forest where you pedal mostly on greenways from beach to beach, from natural space to natural space. The Silver Coast then offers you a getaway in the heart of nature to the first cities of the Basque Country.

When to ride on the Vélodyssée?

The Vélodyssée route can be ridden all year round but really comes into its own from spring onwards. The temperatures are mild and ideal for cycling. In summer, the rhythms evolve according to the frenzy of the seaside resorts that are on the cycle route. Roaming this course calls for swimming and the sweet holiday feeling that accompanies it. In autumn, the colors evolve thanks to the ferns which adorn themselves with their golden robe in the undergrowth. The seaside resorts are calmer, the pace is gentle.
In terms of the weather on the Atlantic Coast, it is important to note that the climate is unstable and perhaps rainy, especially in Brittany or in the Pyrénées-Atlantiques. Rain gear will therefore be essential. In summer, the rest of the Vélodyssée is generally dry and temperate. You may occasionally encounter very hot days. Luckily, the vast majority of the cycle route runs through the heart of the vegetation where the cyclist is naturally less exposed to the elements.

What to see and visit on the Vélodyssée?

There are many points of interest on the Vélodyssée and will surprise many. Regional specialties to be tasted according to the regions, the cultures parade over the kilometers. The cities invite you to stop while the beauty of the landscapes amazes you.

Cities to visit on the Velodyssee bike route

Sites to visit on the Velodyssee