The Dordogne and the Pays des Bastides 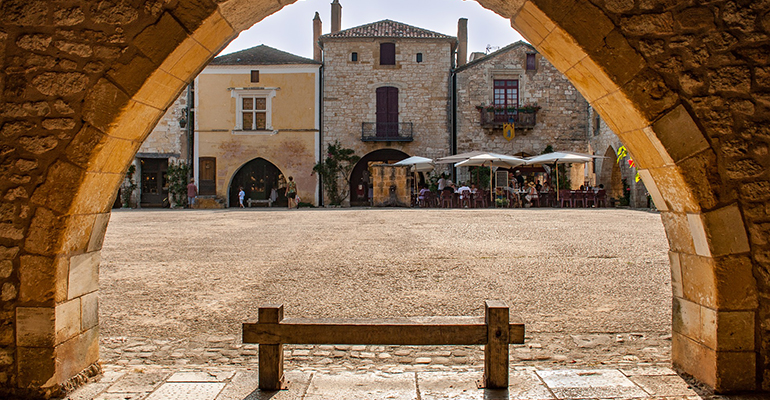 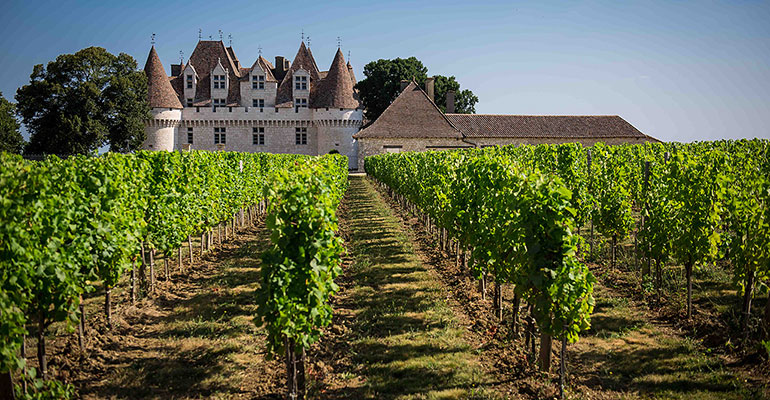 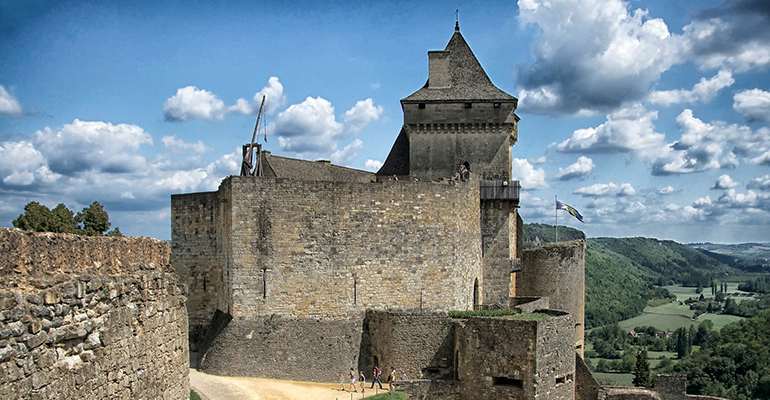 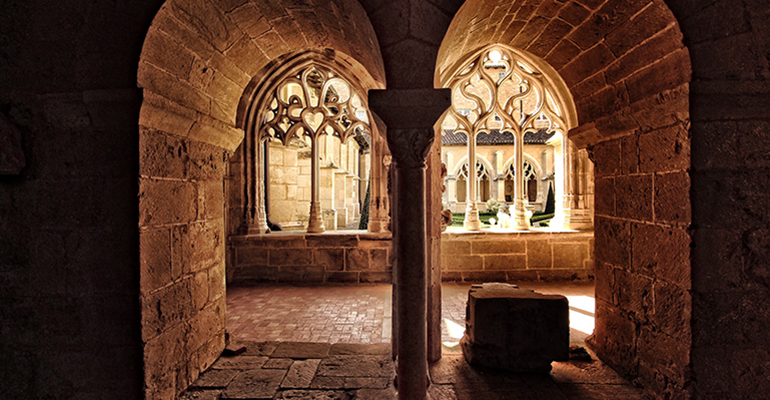 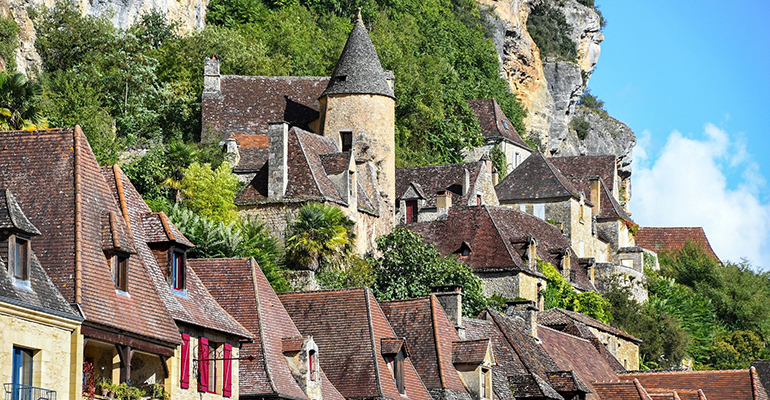 The story behind the trip

Jean-Paul, former president of the Bergerac tourist office, is a real fan of his region. When you arrive in Bergerac, he welcomes you. Take advantage of his in-depth knowledge of the land, he will give you advice on all the good places to discover during this trip.

When we met Jean-Paul, a few months after the creation of Abicyclette Voyages, we immediately wanted to share his passion and knowledge of the Dordogne. Jean-Paul quickly pointed us to the pays des bastides,  for a visit of the beautiful Monpazier. Less known than the Périgord Noir, the pays des bastides is an enchanting place with its castles, preserved landscapes and geometrical layout of villages which have managed to retain their old charm.

A bicycle trip in the South of Périgord

On its peaceful and winding little roads, discover the authentic Dordogne in the heart of the Pays des Bastides thanks to this 8-day itinerary.

From Bergerac, we invite you to explore by bike the peaceful, rural and authentic Dordogne, where history is deeply rooted. Different periods in time have left indelible traces in Dordogne. Prehistory and the Middle Ages bear witness in particular to the natural riches of the region, prompting men to settle and defend this territory.

Thanks to this 6-day bicycle-touring route, you connect the main historical sites which bear witness to the life of the Middle Ages. In the 12th and 14th century, the bastides, new cities erected at the request of the king of France or England, were built in the south of the Dordogne because of the proximity to the Agenais who had become the theater of Franco-English rivalries . The bastides assure the possessions of the King of France and those of the King of England also Duke of Aquitaine. Many of these bastides are found in the Pays du Dropt. This region is made up of many small authentic villages, castles, churches and mills, green hills and valleys but also vines and vineyards.

Castles and mills are particularly present on your cycling routes. Take the time to admire the Malfourat mill, visit the Château de Castelnaud which houses a collection of medieval weapons and armor and discover the world of Joséphine Baker at the Château des Milandes, where she lived with twelve orphans.

There is no shortage of views of the Dordogne valley. The most beautiful will undoubtedly be the one from the village of Domme. This bastide, a model of its kind, perched on the hill will allow you to enjoy a breathtaking and unparalleled view. Of course, this requires some effort on the bike to reach its panoramas. The effort is amply rewarded! The electric bike is often appreciated here to minimize the efforts that the valley requires. The rich and gourmet cuisine also makes up for the day’s exertions. 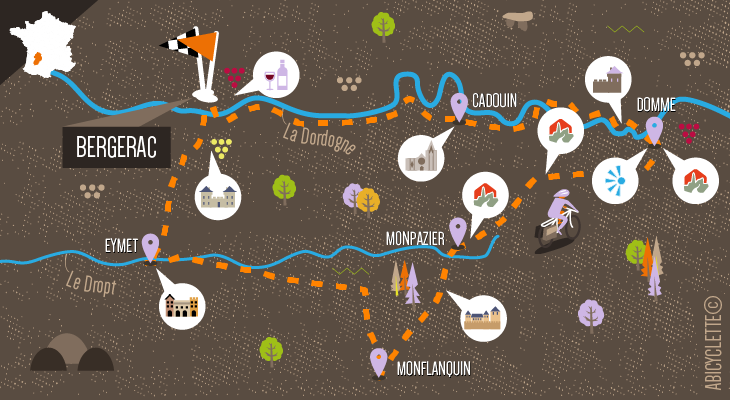 If you arrive in the morning or early afternoon, a first loop invites you into the vineyards of Pécharmant. Small appellation of red wines. This structured wine has a dark garnet color. It calls for some wine tastings at the vineyards! In the evening, you will enjoy the charming town of Bergerac and its lively narrow streets.

Before your first ride, we invite you to meet our local guide, Jean-Paul, at your place of departure. A time of exchange, a privileged moment to give you our last practical tips, must-see places and experiences, to answer all your questions, take care of your bike fitting to begin your trip.

From BERGERAC to ALLEMANS-DU-DROPT 54km 469m

On this first day of cycling, you will set off to discover the vineyards of Bergerac and Monbazillac. After climbing the hills, you arrive at the Château de Monbazillac, a top wine-tasting location for this world-renowned sweet white wine. From this place, you overlook Bergerac and its valley. After a few pedal strokes, you arrive at the Malfourat mill, of which only the Tower remains. You arrive at the medieval castle of Bridoire where you can stop to discover the history of the castle which was plundered many times before being restored. You can also play many games of yesteryear since the castle offers its visitors a hundred ancient games. Finally, through fields and small villages, you reach Allemans-du-Dropt, a charming little village with its mill and its banks.

From ALLEMANS-DU-DROPT to MONFLANQUIN 61km 539m

You quickly reach the Pays du Dropt, named after the river that crosses it and marks the border between Agenais and Périgord. You first cycle to bastide (fortified town) of Miramont sur Guyenne then discover Lauzun, a charming little village whose castle is a listed as a historical monument. A little further east is the bastide of Castillonès, built like many others by Alphonse de Poitiers. Then you reach another remarkable bastide: that of Villeréal, also founded by Alphonse de Poitiers. The wooden hall is perfectly well preserved and the fortified church is imposing. Visit on foot the pretty streets of the bastide as well as the rue Saint Roch. You finally reach the bastide of Monflanquin, listed in “The Most Beautiful Villages of France”.

From MONFLANQUIN to MONPAZIER 33km 362m

From Monflanquin, you cycle through a rural landscape before reaching the Château de Gavaudun. Located above the village on a rocky outcrop, it was first a heretics’ landmark before being one of the last French bastions during the 100 years war. In summer, the life of the castle is enlivened by storytelling matinees, stone-cutting workshops, abseiling from the dungeon … You hop on your bike again and enjoy a few kilometers under the shade of big trees. You will now see the Château de Biron, recognized as a Major Site of Aquitaine and classified as a Historic Monument. A few more kilometers more and you reach Monpazier, classified by the Most Beautiful Villages of France, where you spend the night.

You leave one of the most beautiful villages in France for another. It is by small roads that you reach Belves. This medieval city also called “the city of 7 bell towers” was not spared by invasions and wars but it has miraculously preserved magnificent traces of its heritage built over the centuries. Belvès means “beautiful view” in Occitan. Indeed, its geographical location offers an exceptional panorama over the horizon of the Périgord noir. After a  last effort, you reach the bastide of Domme, from which you enjoy a breathtaking landscape above the Dordogne. A genuine moment of contemplation is presented to you.

Today, you cross the Dordogne before reaching the picturesque village of La Roque-Gageac. Located at the foot of a cliff facing south, the golden houses with brown tiled roofs are reflected in the waters of the Dordogne where the gabars (sailing barges) laden with goods crossed in the 19th century. You now climb up to Castelnaud castle, whose dominant position allows visitors to enjoy a unique view of the Dordogne valley. A few pedal strokes and you arrive at the Château des Millandes, home of the famous Josephine Baker. Between the meadows of walnut trees and the old tobacco barns, you follow the Dordogne before arriving in the medieval city of Saint-Cyprien. Stroll through the small streets of the village where the stone dwellings have been preserved and give the village an incredible charm. You then reach the Buisson de Cadouin.

From CADOUIN to BERGERAC 45km 232m

On your bike, from Cadouin to Bergerac, you are going to discover English bastides. At first, you cross Molières. This English bastide was founded in 1284 by Jean De Grailly, seneschal of the King of England. On the banks of the Dordogne, your route takes you to Lalinde, the first English bastide town in Périgord. It has kept its mission as a trading town and a stopover between Bergerac and Sarlat. The road is flat up to the Chateau de Lanquais, a symbol of power and grandeur. This fortified castle, adjoining a prestigious renaissance palace, was built by the builders of the Louvre in Paris. Following the Dordogne, you will find Bergerac.

It’s the end of your stay after breakfast. Have a good journey home! 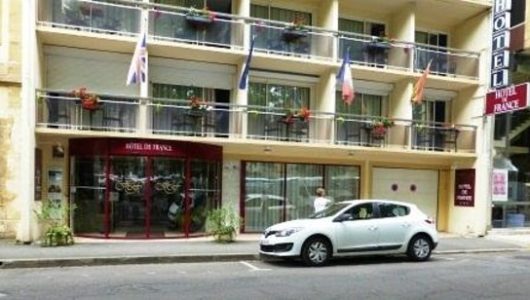 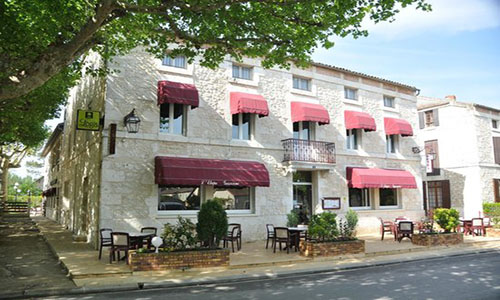 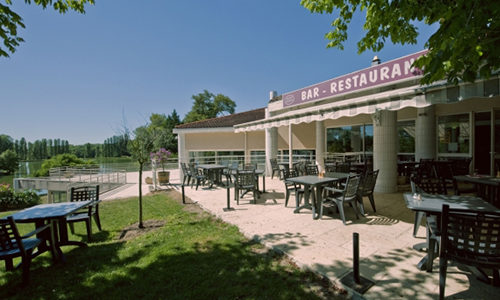 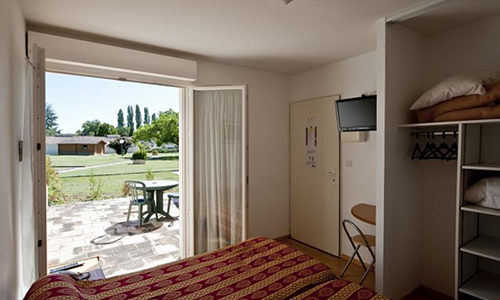 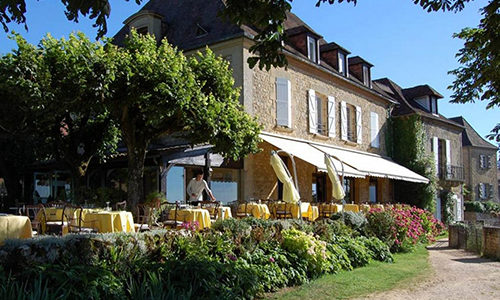 Starting from 990€/participant in Self Guided option | See detailed prices 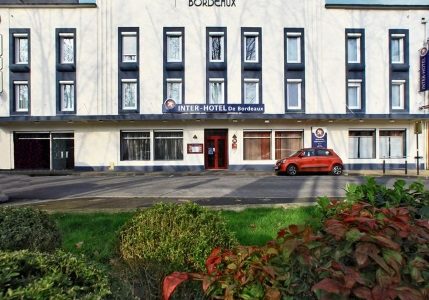 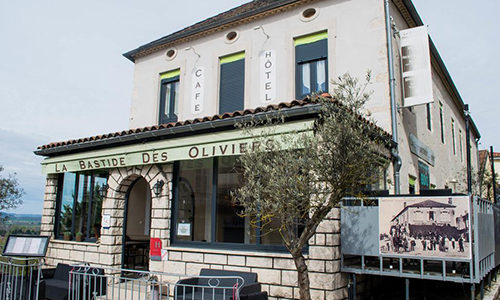 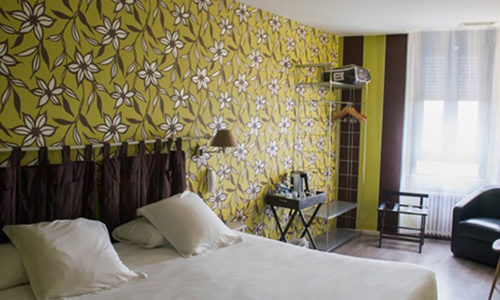 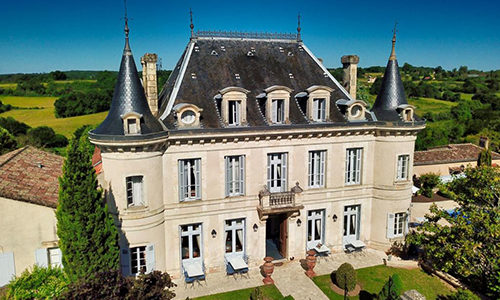 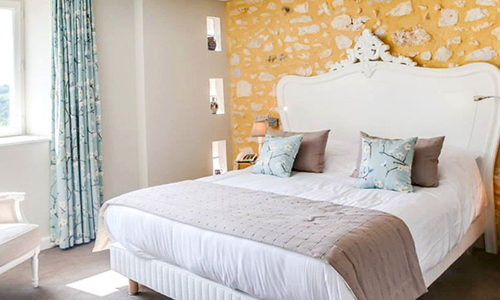 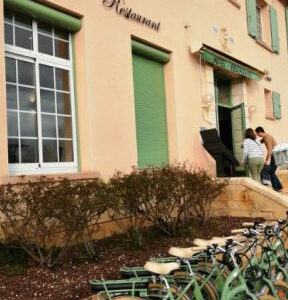 Starting from 1155€/participant in Self Guided option | See detailed prices 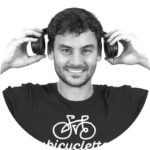 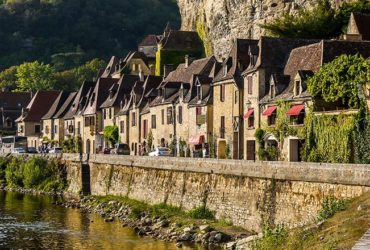 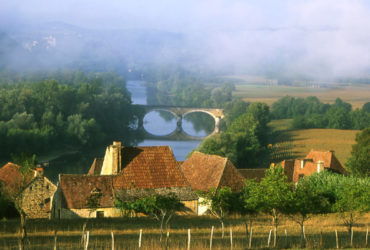 From the vineyards of Bordeaux to the castles of Dordogne

Discover Bordeaux and Dordogne by bike Admire magnificent landscapes by browsing the great wines of Bordeaux[...] 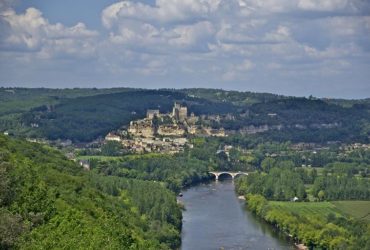 Under the midday sun and the small country roads, enjoy an active and cultural stay![...]

Sarlat and the Black Perigord

Discover the Black Périgord by bike, through the Vézère Valley and its gourmet, cultural and historical heritage.

This stay between the Dordogne and the Lot valley invites you to discover varied and[...] 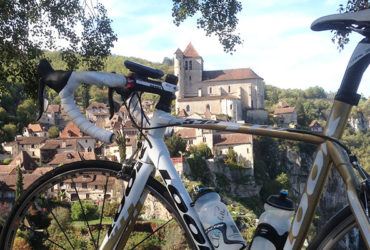 This cycling getaway from Bordeaux to the Dordogne and Lot valley invites you to discover the spectacular and authentic landscapes of one of the most beautiful regions of France.
Cookies & privacy policy We use cookies to give you the best possible experience. By using our website, you agree to the use of cookies.YesNoRead more